RIFFLE is one of Eugene's favorite party bands!

We play hits from six decades of Rock, Blues, R&B, Motown, Country and Pop to create fun, exciting variety shows.  We get audiences of all ages movin' and groovin' to classics!  Timothy Patrick on vocals/guitar, Jim Reinking on vocals/drums, Gus Russell on keyboards/bass, and Paul Hobbs on vocals/lead guitar.  In 2022, RIFFLE will be celebrating our 38th year of making waves!

Below are a variety of photos and logos you are welcome to use and edit as desired.   To get Master copies that are easier to work with, give me a call at 541-344-6393, of email me at RiffleBand@aol.com.  Also, the text above is available for you to modify as needed, or I can send you additional information.

TIMOTHY PATRICK is the leader, founder and owner of the Eugene, Oregon band called RIFFLE, which he started in May of 1984.  He plays guitar and sings in the band.  Over the same time period, he has been performing as a solo acoustic artist, specializing in acoustic arrangements of a wide variety of musical styles and eras, including humorous songs and comic bits.  In 2007 Timothy added adding looping and multimedia elements to his solo shows, and has developed 14 one-hour, themed programs that he presents in concert settings.  In 2015 he went on a 22-state tour with his multimedia shows, and in 2017 he performed shows in Scotland and Ireland.  Timothy also plays in acoustic duos, and with his trio TIMOTHY PATRICK & THE SAINTS.   He has three CDs:  Questionable Advice - 2009; Hangin' with Mr. Peabody - 2011; As the Crow Flies - 2015. 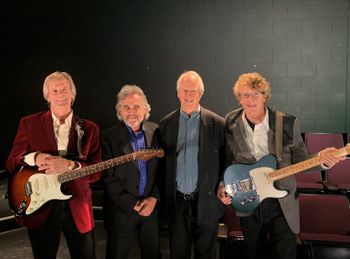